Are you sure you want to logout ?

When Maharshi Dayanand Saraswati was born in 1824, Indian society had reached its cultural, social, and political abyss. He grew up in a politically oppressive milieu, witnessing strong casteism, superstition, religious orthodoxy, and social persecution of women and other groups. He spoke out against prejudice based on caste, creed, sex, economic standing, and social bigotry, as well as masculine chauvinism and religious supremacy of higher castes over lower castes and classes. He pushed for women's rights and founded 'Kanya Vidyalayas' to empower and educate women. Unfortunately, the mission of social resurgence was too large for him to complete during his lifetime, and when Maharshi entered Samadhi in 1883, Indian society had only been partially reformed, and it was up to his followers to complete the task.

After considering the realities of Indian society and the nature of Maharshi's task, his followers decided to commemorate his life and work by establishing temples of learning - Schools and Colleges where all of Maharshi's values would be instilled in the children so that they could carry forward his messages and work tirelessly throughout their lives to carry out the reforms suggested by him. 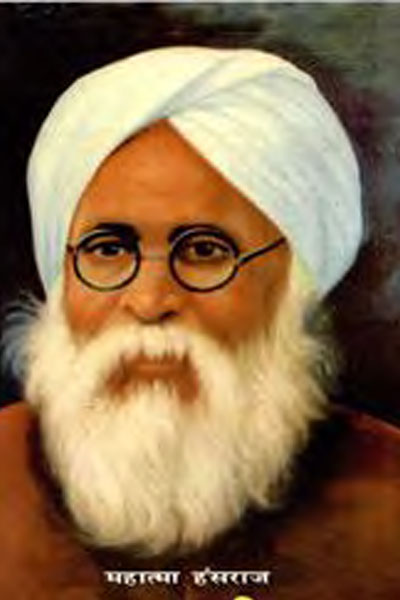 In addition to being an educationist and a religious leader, Mahatma Hansraj, the man whose memory this college was established, was a tremendous nationalist at heart. He was also a tireless relief worker and social reformer, organising relief efforts in the aftermath of earthquakes in Kangra (1905), Quetta (1934), and Bihar (1935), as well as famines in Rajasthan (1905), Awadh (1907), and Garhwal (1918).

He was a major supporter of widow remarriage and the eradication of early marriages and caste inequalities. He transformed the Arya Samaj and the DAV into successful tools of social upliftment and moral regeneration via his efforts.

Mahatma Hansraj was born on 19 April, 1864 in the hamlet of Bajwara in the district of Hoshiarpur in Punjab, in a family of modest financial means. His father Lala Chunnilal was an appeal nawis and mother Hardevi was a simple housewife. Hans Raj's father died when he was 12 years old, putting the family's finances in jeopardy.

Fortunately for Hans Raj, his older brother Muluk Raj received a scholarship of Rs.8/- per month, allowing him to continue his education. At the age of 22, he began his profession as Honorary Founder and Head Master of DAV High School Lahore. When DAV College was founded in Lahore in 1889, he became its Honorary Principal, entirely associating himself with the institution. DAV College Lahore grew into a significant educational institution, instilling in its pupils the values of discipline and self-sacrifice. For fifty years, he guided the destiny of DAV institutions by opening many new institutions in strategic locations. In 1938, he took his last breath. Mahatma Hansraj is widely regarded as the DAV movement's founding father.

Hansraj College embodies the principles and ideals of this noble person who dedicated his life for upholding the beliefs he believed in and practised.

Maharshi Dayanand Saraswati has envisioned the ideals of a powerful and enlightened India (1824-1883). He dedicated his entire life for educating the country's illiterate population. He realised that the only way to achieve it was via education and literacy. Mahatma Hansraj, who led India's educational revolution, put the vision and philosophy of Maharshi Dayanand, India's courageous reformer, into practise. The Mahatma's most important legacy is his pragmatic and intelligent attitude towards education.

His choice of English-oriented Science-based education with a blend of Vedic ideals was one component of his approach. Another was his strong emphasis on women's education. Finally, Mahatma ji thought that all the students, regardless of caste, color, or creed, were welcome to join the DAV institution, in keeping with the egalitarian premise of Arya Samaj's ideology (as articulated by Maharshi Dayanand).

Lala Hansraj (later Mahatma Hansraj) served as the first Headmaster of the institution, which was opened in Lahore in 1886. DAV veterans like Padma Shri G.P. Chopra and his team of devoted office-bearers, who have a progressive vision, are leading the movement today. Every year, DAV CMC opens new schools in various parts of India as a result of their dedication and foresight.

The Arya Samaj is both a faith and a way of life that is progressive. Swami Dayanand Saraswati, a famous thinker and social reformer, founded it.

He witnessed the Indian civilization in the 19th century, which was enslaved by age-old rituals, superstitions, and beliefs. He coined the phrase 'Back to the Vedas' to encourage people to abandon their faulty beliefs and adopt a more objective, reasonable, and progressive lifestyle. He spoke out against prejudice based on caste, creed, sex, economic standing, and social bigotry, as well as masculine chauvinism and religious supremacy of higher castes over lower castes and classes. He brought in a social renaissance in Indian society by spreading Vedic knowledge. He was a passionate proponent of eradicating ignorance and illiteracy via education for people of all castes, rich or poor. He advocated for women's education and widow remarriage.

Swami Dayanand Saraswati is the only person in history who has become so completely connected with the nation's social and moral renaissance. As a result, Arya Samaj aspires to make the man a good human being and achieve two-fold development, namely spiritual and social upliftment.